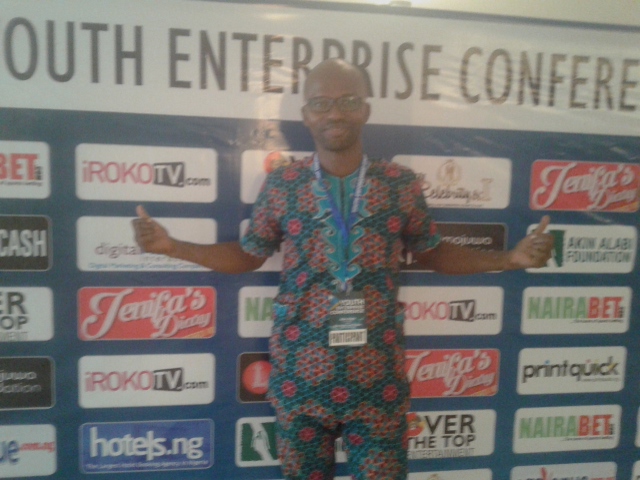 This was the second edition and…

It was indeed awesome.

My heart was strengthened (pumped up in the words of Otunba Akin Alabi).

Yes, what I mean?

Except if you’re not residing or doing business in Nigeria.

Back to my heart receiving some boost.

I received deep within a lot of encouragement, inspiration and motivation to move on with my entrepreneurial journey.

I got hope and the drive that things can still work out right here in Nigeria regardless of whatever I’m facing as an entrepreneur.

took the stage with fire in their bones…

…they were more than inspirational –they wanted action…

WARLIKE AGGRESSIVENESS in the words of Jason Njoku.

Some of My Take Away Quotes
Let me quickly start with the first speaker:

Pheelz Mr. Producer
In your entrepreneurial journey, “Make sure you fall forward”
“Have a strong passion” that’ll keep you through the thick and thin of pursuing your dreams.

From Wooli Arole (The Prophet)
“If you are loaded, you will be needed”

Andrew Airlobhegbe, CEO Ogavenue
“Get a team” to help you bring that dream come true.
You have to determine to “Hustle or Fail”

Biola Kazeem
“Success will test you”
“If things are brutally hard, it could be a sign that shows you’re in the right path”

Mark Essien CEO Hotel.Ng
“Get the right attitude”
He also told us to go look for the meaning of stoic.
Right here with Microsoft Word, I couldn’t find any synonyms.
So I jetted to ‘BABA’ Google and this is what I found out it means:
“A person who can endure pain or hardship without showing their feelings or complaining.”
WOW!

Japhet Omojuwa, CEO Alpha Reach
“Think about your environment differently”
“Don’t demonize people that fight for their rights”
“Be ruthless where applicable”
“Persistence is knowing what you want and going for it”
“Strategically cut off relationships that don’t add value to you”
“Be intentional about your life”

Jason Njoku CEO IrokoTV
“You need to be a warlord to survive in Nigeria”
“Be vicious, aggressive in your entrepreneurial journey”

Akin Alabi
“Don’t create a product or business and then look for customers, rather look for what people want and then create a business around it.”

Special Bonus
For attending the FREE Conference, 50 lucky people got a total sum of N5Million from the Akin Alabi Foundation to support their small businesses.

That promise was also fulfilled as winners were called out, encouraged and charged to be good ambassadors.

These people are no politicians.

“Unexpected Miracles”
Aside the bonus, there were gifts for the person that attended the conference from the farthest place in Nigeria.

A guy from Kebbi eventually won the prize.

Guess what it was?

A flight ticket back to his base (he came by road and had to break journey in two) and N100,000 (maybe I should write it in words so you’re not mistaken: One Hundred Thousand Naira).

Hope you got that clear.

He burst in emotional upheaval…whatever that means.

There was another “miracle scene” wrought by Akin Alabi when he called out an upcoming Rap Artiste (KingzKid –though they told him to change his stage name).

He was called out to come perform live and did he get everybody EXCITED!

That won him a N1M recording contract and N100k.

Do I need to write them in words?

Sincere Willingness to Help
You could virtually see the willingness to help young, upcoming entrepreneurs succeed.

There was this air of commitment on the part of the speakers to help more people succeed like them –and it was just glaring.

After each speaker, came general questions and one-on-one sessions with the speakers.

Even when “Bouncers” tried warding off people from reaching them, they refused –Funke Akindele was one great epitome of humility.

My Arguments
I had written down some questions to ask but time wouldn’t permit me to ask.

Well, I own this space so let me air it out here.

Jason Njoku raised a policy of his that didn’t go down well with me.

He said he’s not willing to help young, upcoming entrepreneurs with investment money until traction is gained in the business.

Now this is why this didn’t go down well with me:

1.    Some people can learn on their own while some need a guide, some form of push (as shared in Akin Alabi’s book –I’ll share my lessons in another post).

Everybody needs encouragement at some point in the entrepreneurial journey especially in Nigeria. Leaving them off to bask in their own blood (even though they may deserve it) in my opinion is not good enough.

Let me refer to what Jason also wrote in the foreword of Akin Alabi’s book:

“My personal experience is that in Nigeria, people don’t really share knowledge. Not in the business world. Not unless they want something in return…Which is a shame, as it means those starting out have very few genuine points of reference from which to learn.”

2.    Entrepreneurs Need Coaches: As upcoming entrepreneurs, I feel we can make do with some form of guide –you leading the way because you know it. I feel it should be more of a mentor-protégé relationship.
Being totally capitalistic may not necessarily be the way to go.

SUMMARY
it was indeed a great time at the #YECO 2017 Conference.

I will specially implore all my friends and loved ones to make it a date next year 2018 (God keeping us all alive and healthy).